Hi there!  August guest designer Emily
{ http://justem.typepad.com/scrapbookery/} here with a tutorial for a quick and easy layout.  This layout really evolved from the planning process to the final product. I created my entire layout based around the cute little “pretty things” wood veneer arrow that came with the main All the Glitters kit.  I love the font on the arrow, and I thought I had the perfect pictures to use. I originally planned a layout with four square photos of some great vintage items at a local event I attended.  They were definitely ”pretty things.” I hadn’t used any of the pink elements in the kit yet, so I also wanted to be sure this layout included some pink. I thought perhaps pink, orange, and aqua would work well together. However, as you will see, my final layout does not use these colors or have four photos. Nor did I even end up using the photos I had originally intended!  Once I started creating the layout went  in a totally different direction.
My first step was cutting down my 12x12 patterned paper to 8.5x11, since that is the size that I scrap.  I often put strips on the edges of my paper, so I found a few and tried them out. The pink stripe was actually a strip from the edge of one of the Shimelle papers. 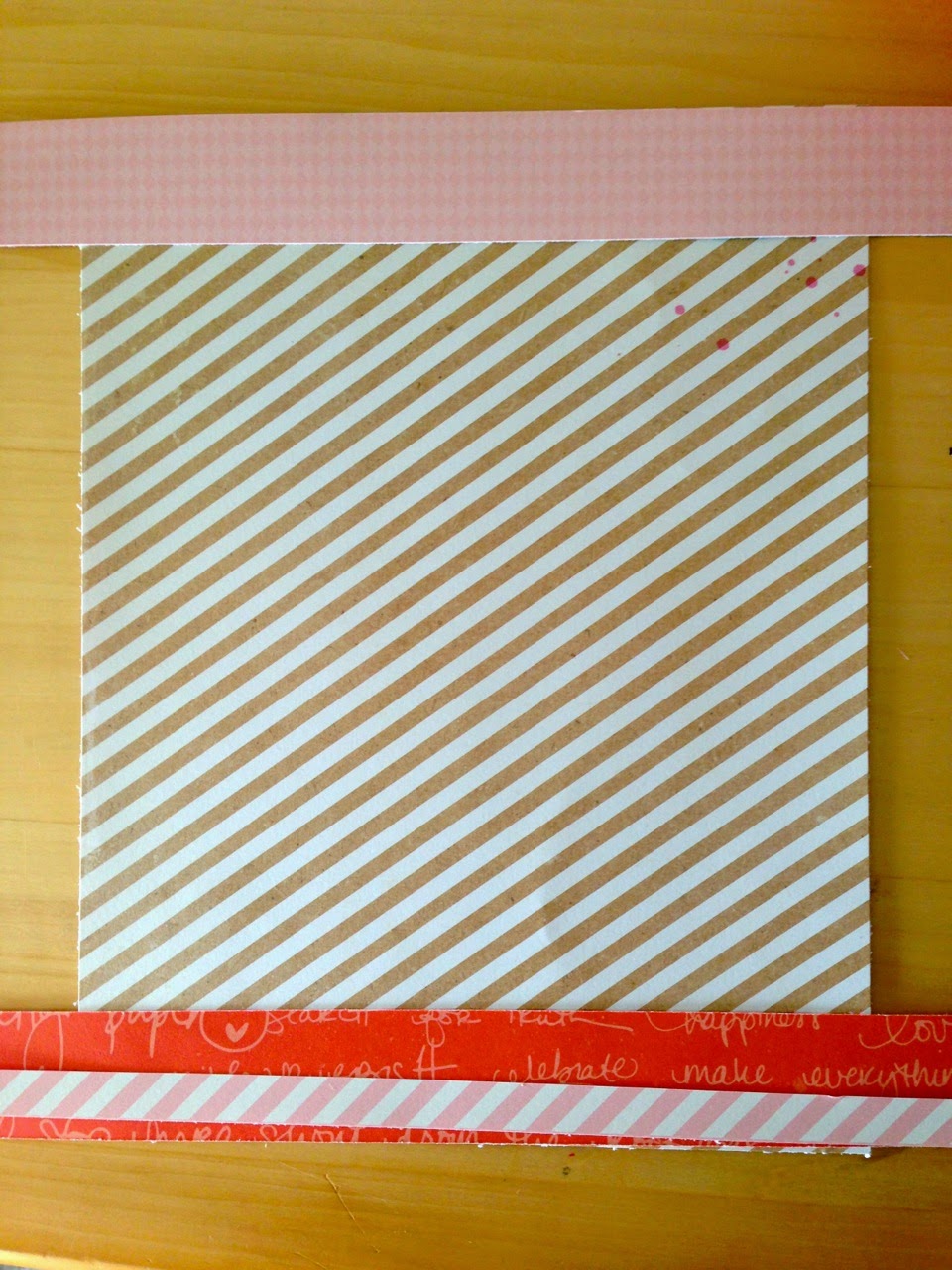 I ended up using these papers, and I added some gold star vellum at the top.  At this point, I realized that my color scheme was going to be orange, pink, and gold…forget the blue!  I started pulling out all of the pink and orange elements I could find from the ephemera packs (both the Crate Paper pack in the main kit and the Heidi Swapp pack in the Seaside Adventure add-on kit) and placed them haphazardly on my page. I thought I could choose a few to use, and I wanted to see all my choices spread out. 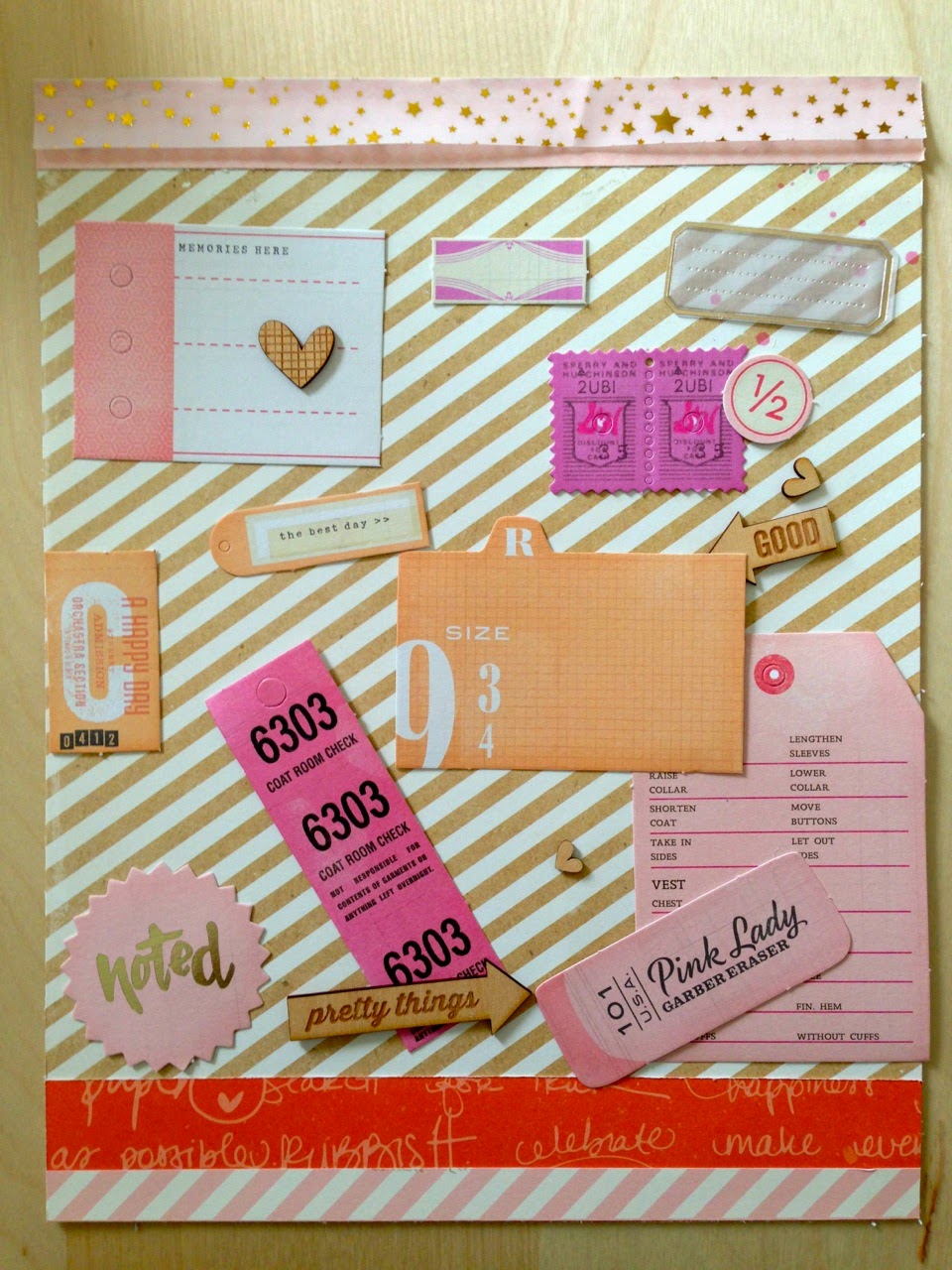 After I saw all the little bits on my layout, I realized that I really liked how they all looked together. At this point, I completely scrapped my idea (pun somewhat intended!!) to use four photos and decided that one would be sufficient. I decided I would place it on top of the large pink tag.  Sometimes I make a layout with the photos in mind…and sometimes, like this time, I have a creative idea, and the photos are the last thing I add!! I rearranged my die cuts one final time before sticking them down, although, the final layout looks different than this, because I continued moving and changing things as I went along. 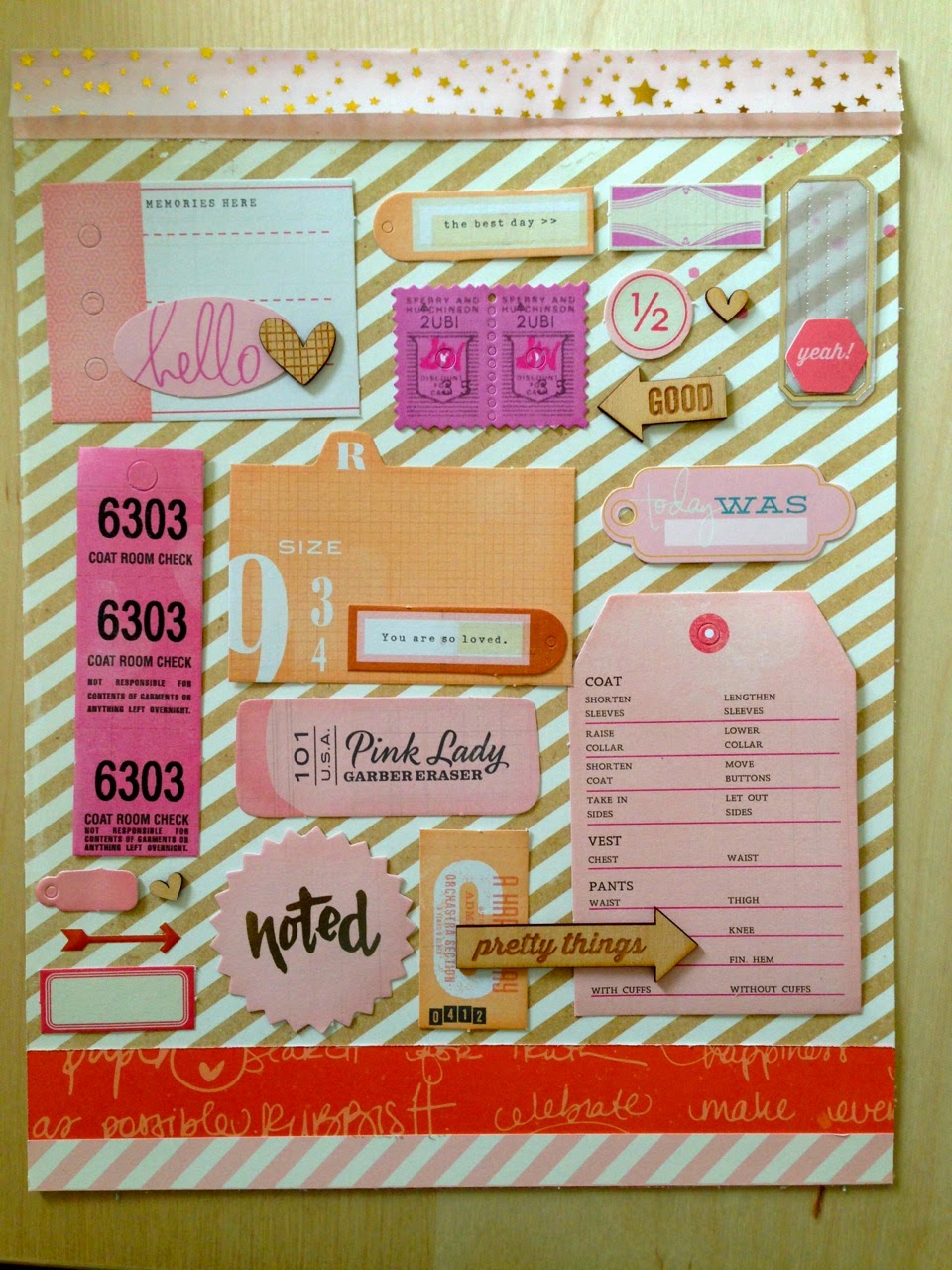 I used all the die cuts, added some stickers and enamel dots, and finally added my photo. I ultimately chose a picture of my daughter in her dance recital costume.  The pink matched my feminine layout, and, quite frankly, she is the ultimate “pretty thing,” in my book!   I used the stamps from the main kit and the Weather Advisory stamp to add some text to my layout. I also placed a strip of journaling along the bottom. 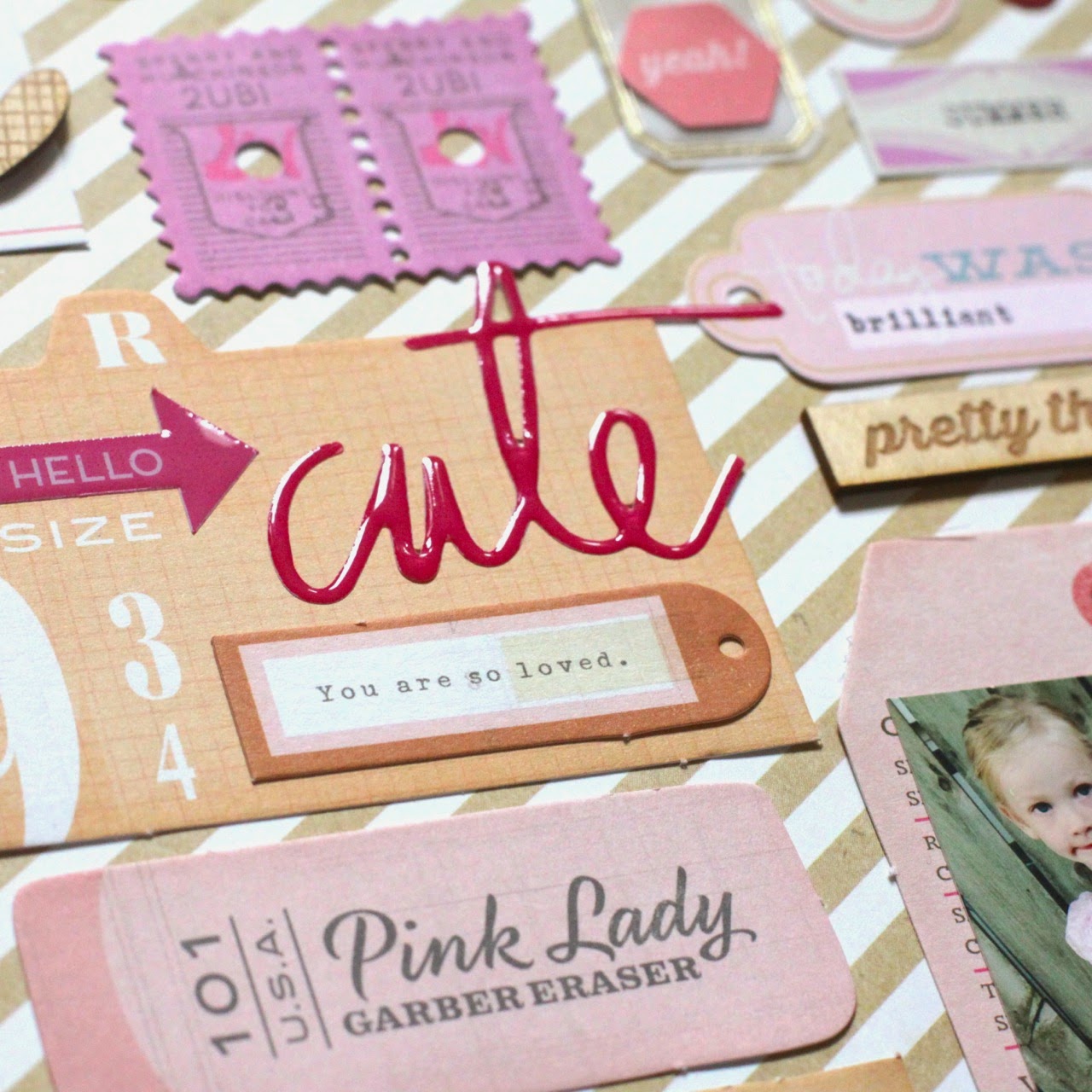 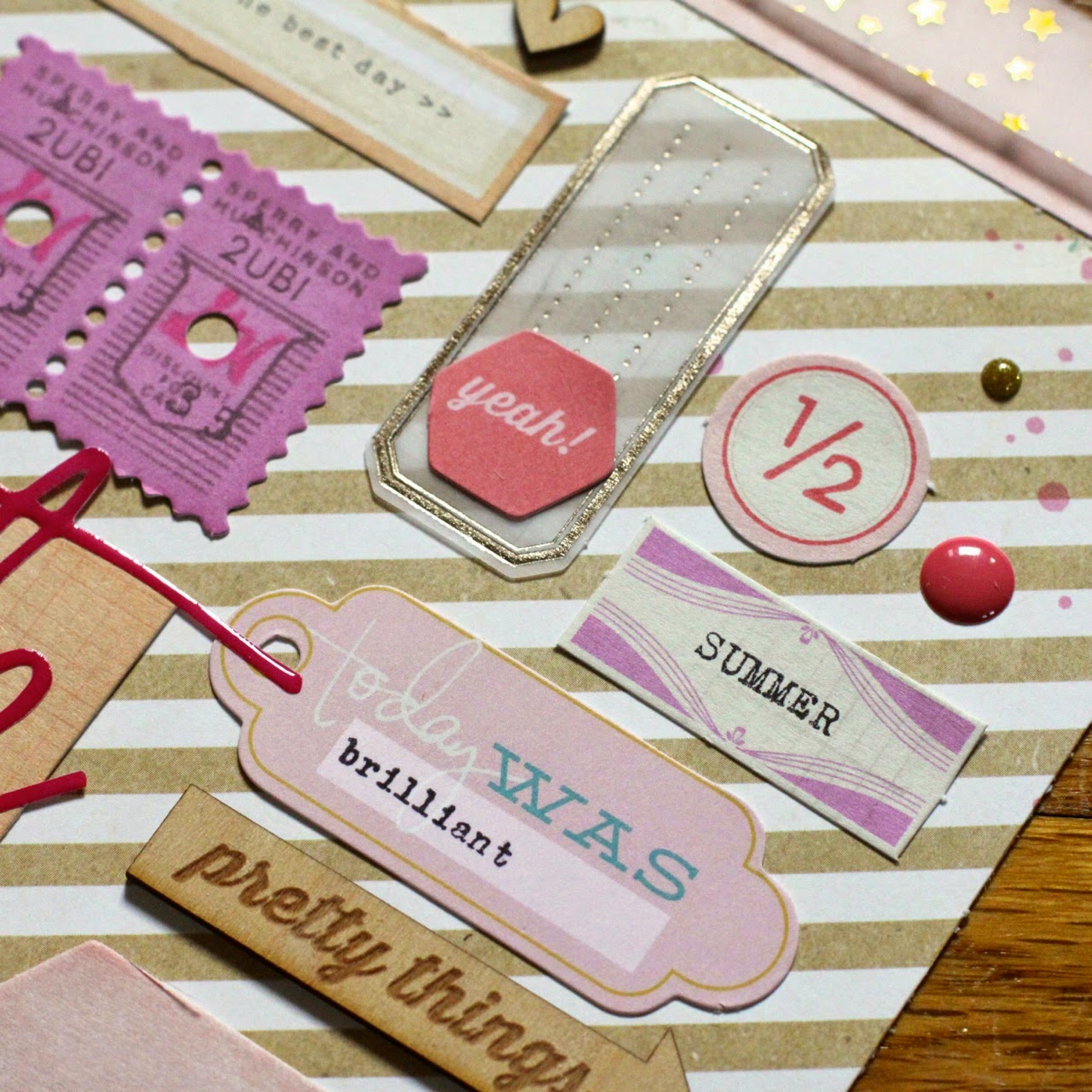 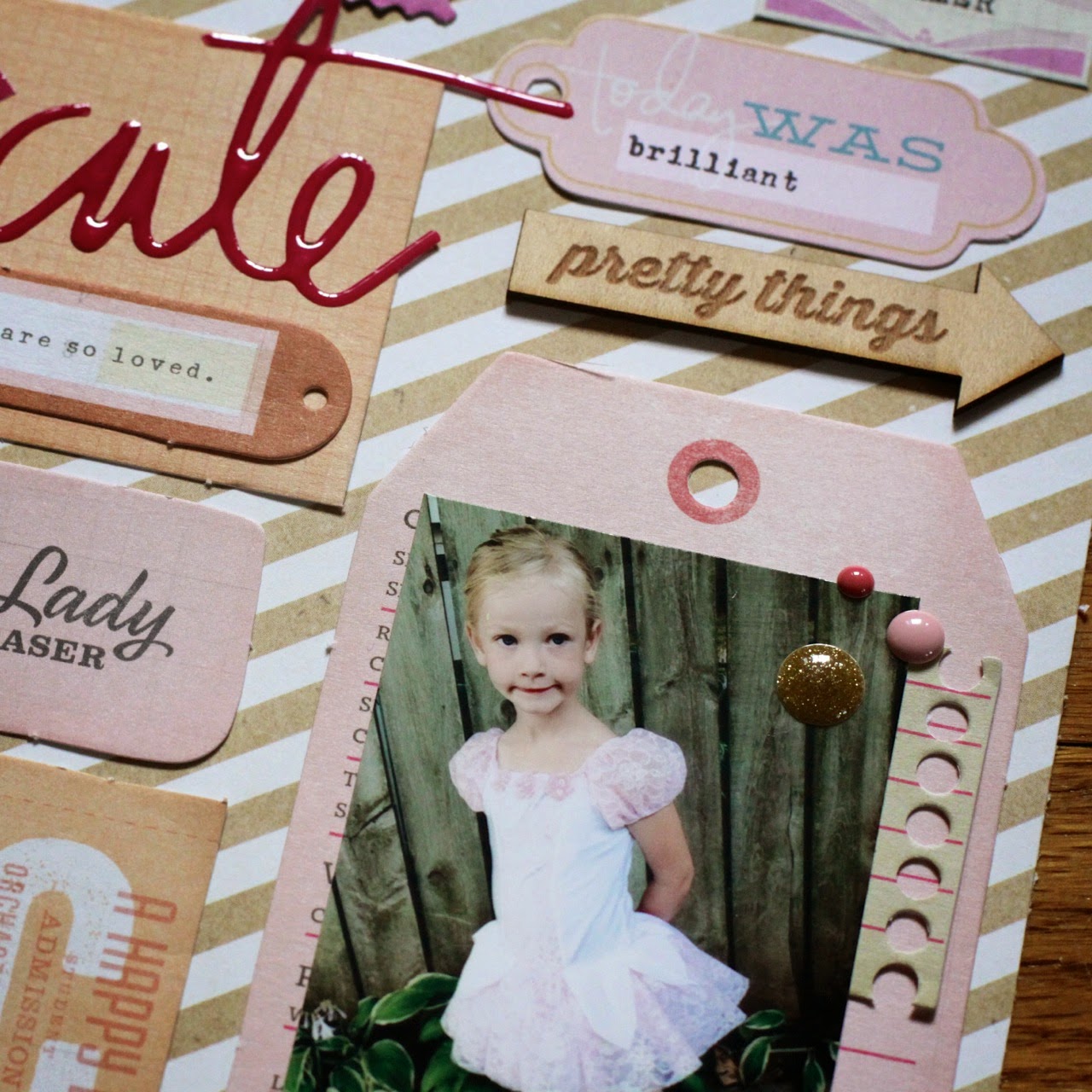 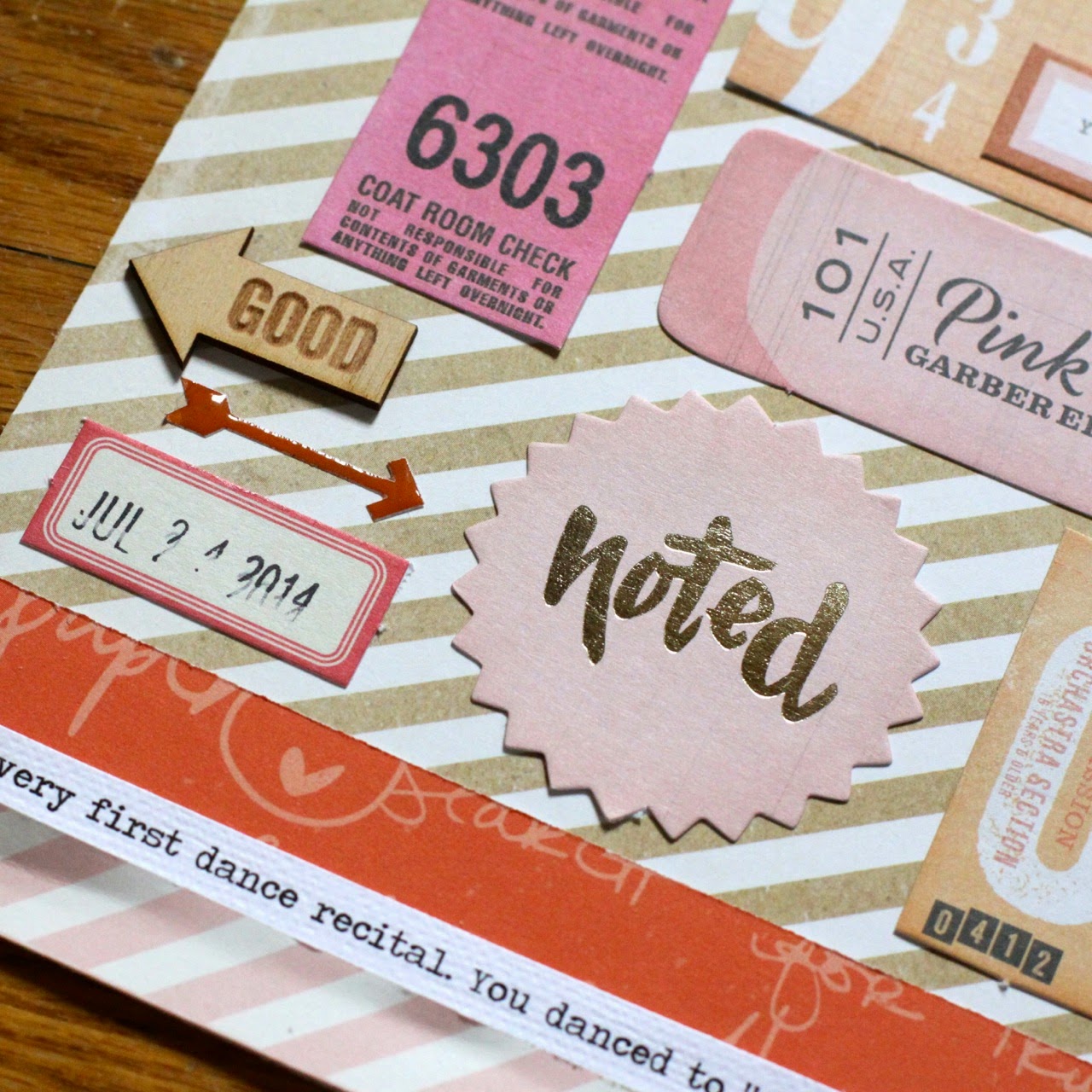 Here is the final product. I ended up not using a large title, but there are so many little sentiments on the layout, that I think it’s okay not to have a definite title. My final layout looks pretty much nothing like I’d envisioned at the beginning, but that is okay!  The entire thing took me about an hour to finish. While it is a pretty busy layout, it was actually quite quick and simple to create. 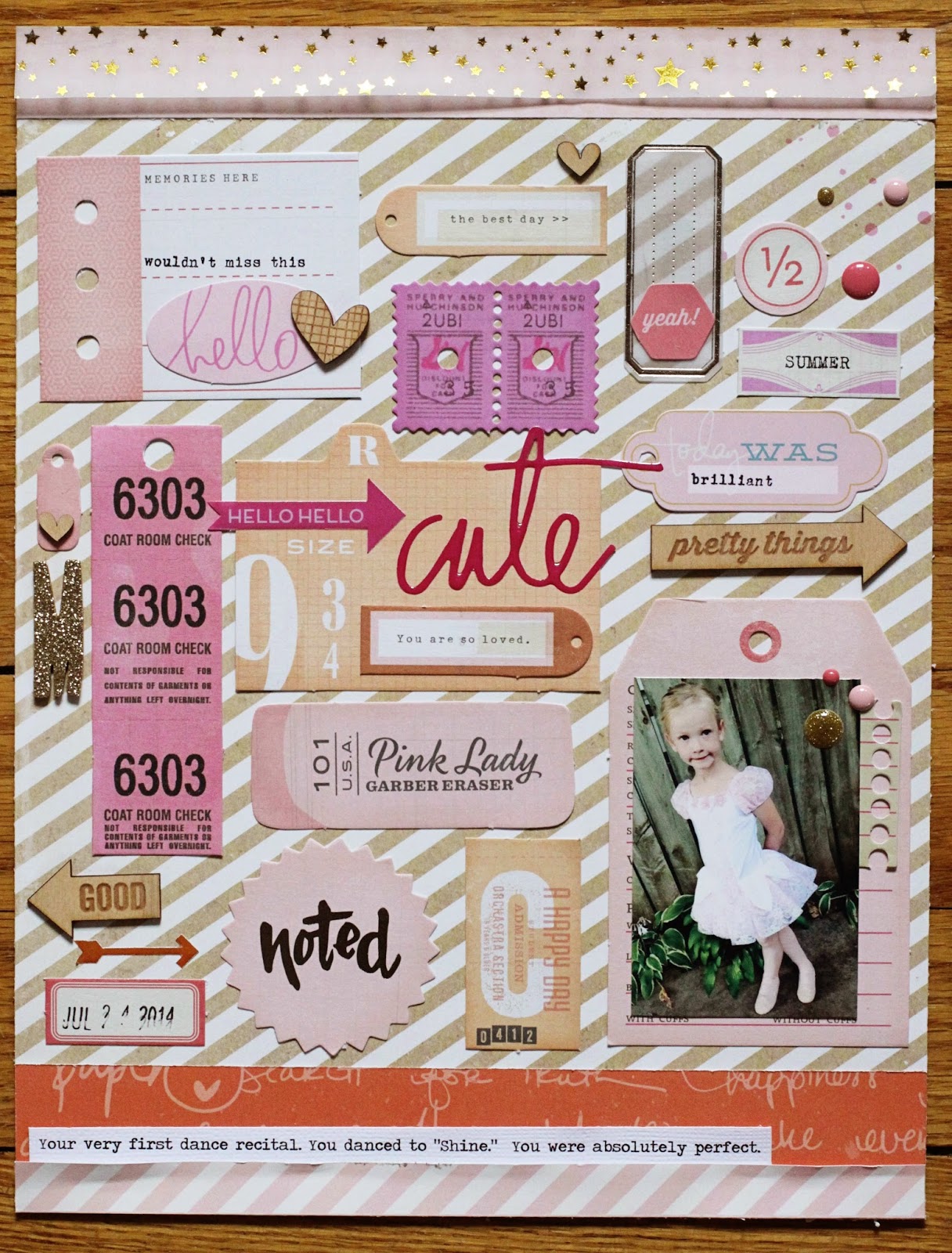 The process of creating this layout reminded me that it’s okay to abandon your plans and go with the flow. Who knows, the results may be even better than your original idea!
Posted by angie gutshall at 5:00 AM